The Sheriff family ran Reliance for 52 years. John and Margaret Duff have now owned it since 1980, taking it over from Ted’s daughter, Carol and her husband Richard, who ran it from 1967 to 1980.

The first owner of Reliance, Edward Sheriff, came to York from Hull and was involved in various bus operations, taking over the York to Helmsley route from Ovington Motors Limited, York in 1930 with three buses. He traded as Reliance and moved operations to the garage at Wigginton Road, Sutton on the Forest, which is still in use - the registered office was always at his home. The buses were garaged in the yard of the Feversham Arms Hotel but by the mid-1950's Reliance had built a garage adjacent to the railway station - it later became a car garage. Ted Sheriff sadly died in 1965, aged 70. The fleet needed attention - it had not been augmented since 1956.

West Yorkshire are said to have sympathised, selling Reliance two good Bristol L buses and an LS coach at “helpful”prices - this may not have been entirely philanthropic as, in the then current political climate, West Yorkshire would probably have been made to take on the service. Next year Carol and her husband, Richard Shelton (who gave up his job as a truck driver) decided to commit themselves to the firm, forming Reliance Motor Services and investing their savings. They updated the fleet, with further ex West Yorkshire Bristols for the Brandbsy service, which remained busy. The fleet was nicely painted and lettered and very well maintained.

The livery was changed to red! This was carried by the two new Seddon RUs which were purchased in 1972. They were kept smart and presented a very good public image but proved troublesome in service - a problem suffered by many operators of the RU, especially the ones which had Seddon’s own body. Frustrated and irritated, the Sheltons got their problems into the national press - Seddon sent its demonstrator vehicles to replace them whilst they were taken back to Oldham for rectification. After five years they were replaced by Bedfords. The Sheltons ran the business successfully until November 1980. They sold it to another enterprising young couple - John Duff and Margaret Duff. Under its new owner the livery was altered back to cream and green and the fleet was updated with Leyland Leopards and then new, modern vehicles immaculately kept. John Duff has done a superb job developing the business and in 2009 his achievements were recognised by the Minister of Transport. 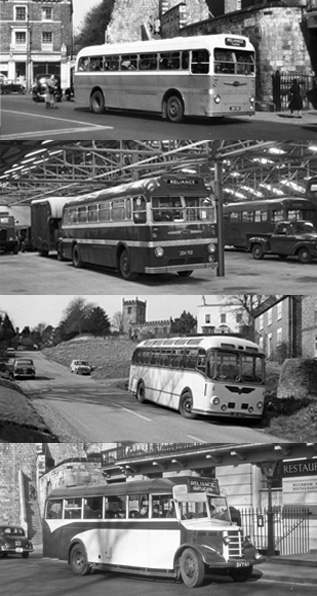